Christmas is nearly upon us and many people will be decorating their houses with evergreen cuttings such as holly and mistletoe; but why I hear you ask? Okay, you didn’t ask, but you are wondering now aren’t you?

The association of these plants with a mid winter festival goes back a long, long way. The Romans had their festival of Saturnalia. This was a feast held in December for the agricultural god, Saturn. They used evergreen decorations, gave gifts and generally had a good time. 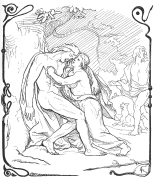 Yule was a Norse Solstice festival celebrated in honour of Frey, consort of the goddess Freya. He was born to a virgin mother. The Norse god Balder was slain by a spear of mistletoe, he was supposed to return after Doomsday; so we are seeing the familiar natural pattern of new life and resurrected life being represented symbolically and religiously. Holly to the Druids was the plant of death and regeneration and was sacred to Hel, Norse queen of the Underworld. She was worshiped by Germanic witches whose wands were made from holly, as is Harry Potter’s magic stick. During Yule, holly with it’s red berries representing femininity and mistletoe with white berries representing masculinity were brought together. Mistletoe was revered by Druids as it supposedly drives away evil spirits.

These pagan festivals were adapted by early Christians. There was often much argument within the church about the use of evergreen decorations, some were happy to assimilate the old customs, whereas others condemned them as heathen. It now seems generally to be accepted that the Christian festival of Christmas can be celebrated with evergreen decorations. Evergreens have to be cut on Christmas Eve then taken down 6th January, the 12th day of Christmas or 12th night. The third Christmas evergreen, ivy has been discussed in this post. 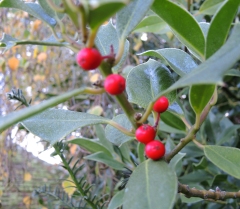 There is an interesting crossover in the tale of Gawain and Green Knight  A completely green Knight arrives at Arthur’s court during their Christmas party. He is holding a holly branch, pagan symbol of the return of spring and therefore a sign of peaceful intentions. Many interesting adventures follow. The Knight is symbolic of The Green Man another pagan character who often appears in early church carvings.

There are a fair few folklore traditions involving these two auspicious plants: 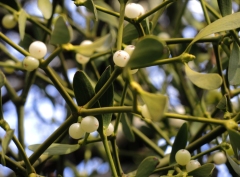 Mistletoe was hung in the house all year to bring good luck and ward off witches and was replaced every Christmas. Drinking from a holly wood cup was said to cure whooping cough, as was mistletoe. If the holly brought in for Christmas is smooth not prickly then a woman will dominate the home. According to Pliny, Celtic women would carry mistletoe in their pockets to promote conception. When kissing under the mistletoe the man should pick a berry and present it to his lady friend, if she accepts then it will be true love.

Back down to earth for some evergreen facts: holly berries are slightly toxic to humans and household pets but an important food source for birds. The leaves can be used to make tea and were used as winter fodder for cattle, before turnips became popular. Holly is the wood traditionally used to make Great Highland Bagpipes, rather more useful than magic wands, depending on how sensitive your ears are.

Mistletoe is a parasitic plant that attaches itself to tree branches and absorbs water and nutrients from its host to supplement its own photosynthesis. It has evergreen leaves and white berries that are very poisonous, except to the birds that feed on them, particularly the mistle thrush. As mistletoe attracts berry eating birds it has been found to be beneficial to other plants, such as juniper, which also rely upon these birds to spread their seeds. Mistletoe is the county flower of Herefordshire as voted for in 2002 in a Plantlife poll. It grows very well on fruit trees and so is abundant in the apple and pear orchards of the county. The nearby town of Tenbury Wells has annual mistletoe auctions. Finally and less pleasantly; mistletoe’s very sticky juice, called bird lime in South Africa, is smeared onto branches to trap small birds. 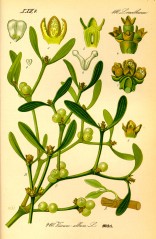 So now you know why you have to put up with painful prickles from holly and dodging amorous fiends under the mistletoe every Christmas.

10 thoughts on “Holly and Mistletoe”