We had another night of freezing fog. The fog was still pretty dense by the morning. Bulmer’s woodpecker was well lit though.

The happy thing about a foggy night when it is very cold is that rime frost is created. The water droplets in fog are very much smaller than rain droplets. When these tiny droplets hit an object that is below freezing, such as a branch of a tree, these droplets release their heat very rapidly. This results in them freezing at high speed and pretty much maintaining their form. These frozen droplets build up on top of each other with air gaps between, this makes them appear white. And so rime frost is formed creating a very pleasing effect upon objects.

The effect is similar to hoar frost; this is formed when the air is humid, but it is a clear freezing night. Glaze frost is created when rain droplets freeze onto objects, being larger they spread before freezing and so form a clear “glaze”. Enough of the science, let’s enjoy the pretty pictures. First of all, some rose hips in the hedgerow. 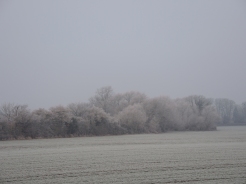 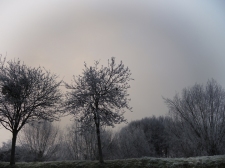 Some more frosty trees as the sun starts to burn off the fog. 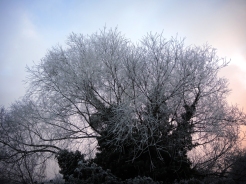 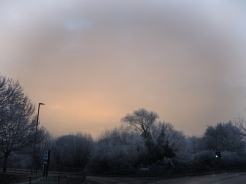