In addition to the Whitefriars Cross mentioned in my previous post, The Cross at Whitecross, Hereford also has a Blackfriars Cross.

This is to be found closer to the centre of Hereford City in the ruins of the Dominican Blackfriars Monastery. The friary was established in 1322, with the preaching cross in the cemetery. The preacher would stand inside the structure and proselytize to whoever gathered to listen. The nearby Coningsby Hospital was originally built in 1200 by the Knights’ Hospitallers, the crusading knights of the Order of St John.

The preaching cross is a very rare example, I have read that it is the only surviving example. The cross was pretty much just a ruin when the famous artist Turner painted it. As with the Whitefriars Cross, the Victorians restored the preaching cross in 1864. They seemed to be fond of using their new found industrial skills to take care of our history. 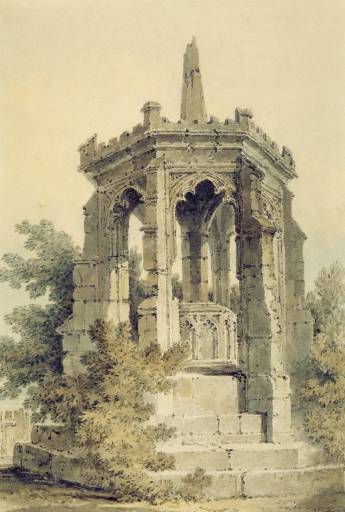 In 1538 the monastery was destroyed during the Dissolution of the Monasteries when Henry VIII disbanded such properties to raise money for his military campaigns after his spectacular falling out with the Pope. It was also considered by many that there were too many religious orders owning too much property and wealth.

These photos were taken on a film camera in the 1990s and digitally scanned.