Following on from my post about the poppy display at Hereford Cathedral in the snow, here are some more photos from my walk into Hereford City during the Mini Beast from the East’s blizzard.

I thought this blossom looked very pretty in the snow. At first I thought it might have been blackthorn, but there were no thorns and some green shoots were showing, so I expect it is some sort of cherry plum type thing. 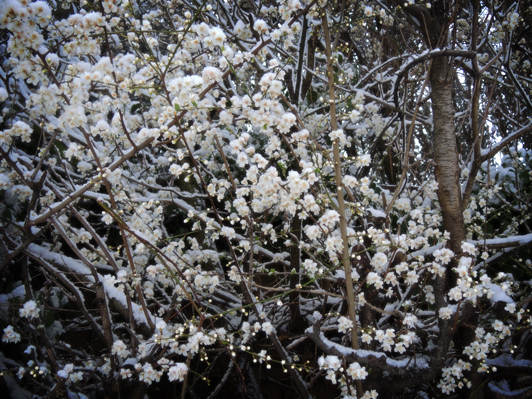 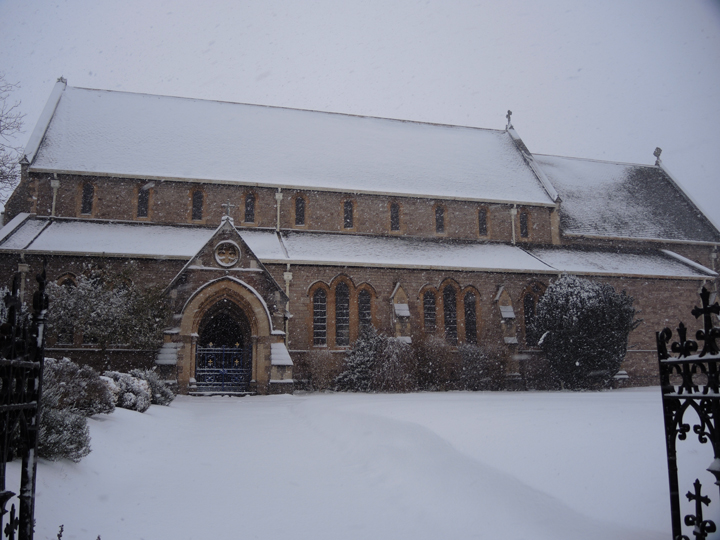 In the grounds stands a memorial cross dedicated to the men of the parish who died in WWI and WWII. For more information on the memorial, the wording and the names inscribed see this website. 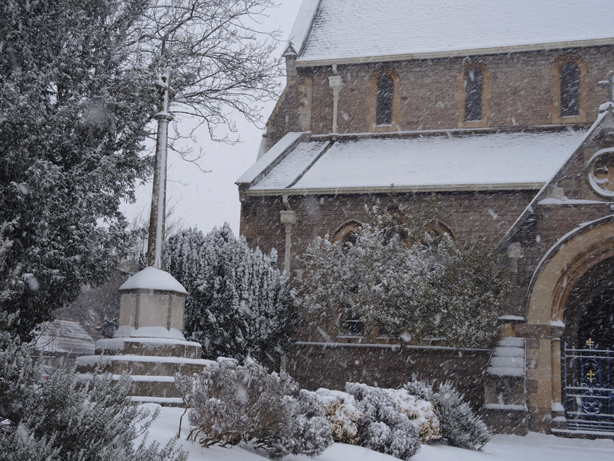 Regular readers will be familiar with the Bulmers woodpecker. This is my only photograph of it in the snow.

Next to it is the WWI memorial poppy bench. 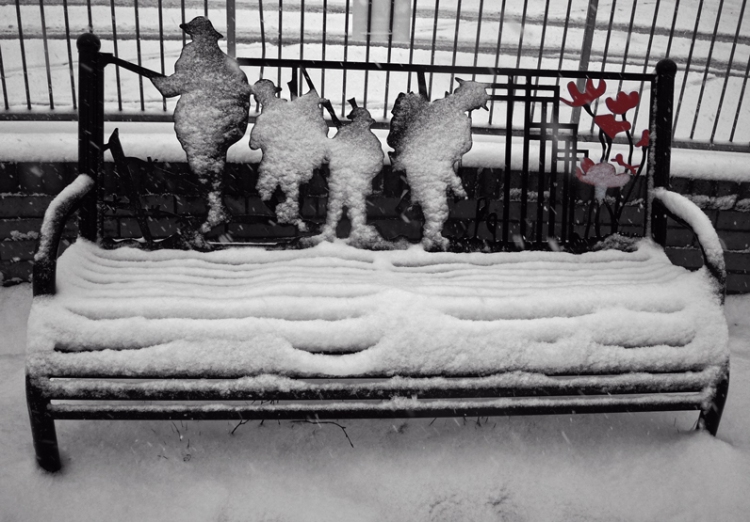 Another opportunity to save my soul; Eignbrook church. It is another lovely building.

Now we reach the old medieval walls that used to encircle the City of Hereford. Not much of a deterrent to ingress these days, unlike our traffic system. Note the snow squished daffodils.

This part of the wall was the site of one of the entrances into Hereford and the area is still called Eign Gate.

Now we come to the cathedral, it is currently hosting the WWI poppy display “Weeping Window” as mentioned in a previous post. 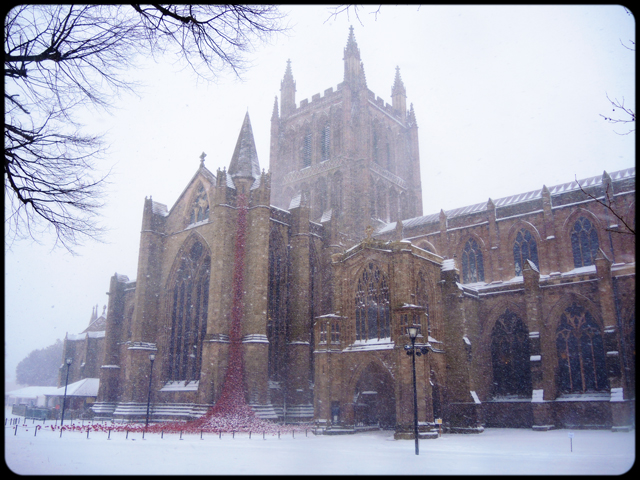 Skipping along to the nearby Old Bridge, we get views of the River Wye ….

… and the other side of the cathedral.

Walking down by the river and sheltering under the New Bridge we have the Old Bridge and cathedral in one direction. 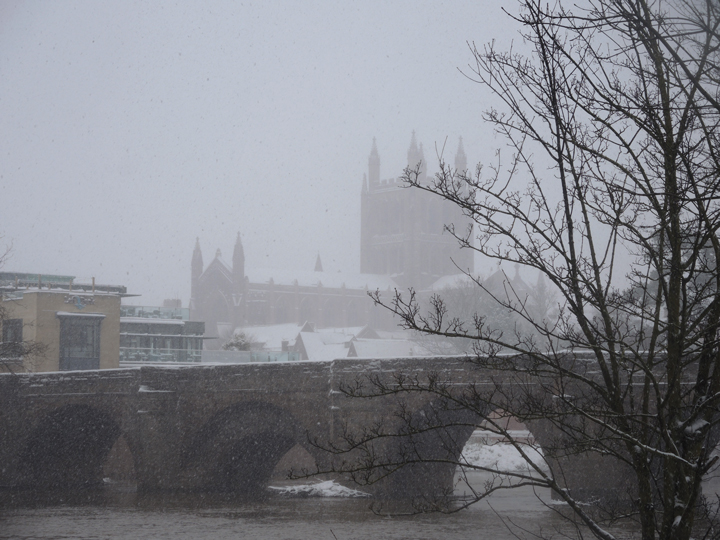 Hunderton bridge emerges through the blizzard in the other direction.

Back at the cathedral, Sir Edward Elgar patiently waits for the pot holes to be repaired before it is safe to cycle home to Malvern. 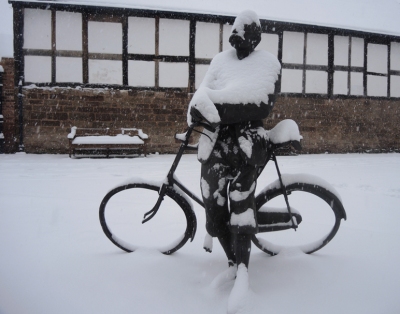 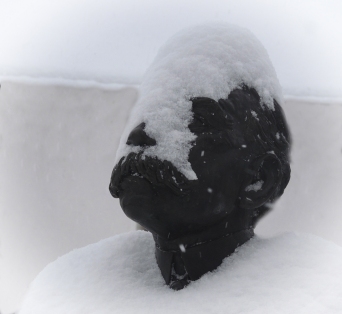 Also left out in the cold is Bully, the sculpture of the iconic Hereford bull. 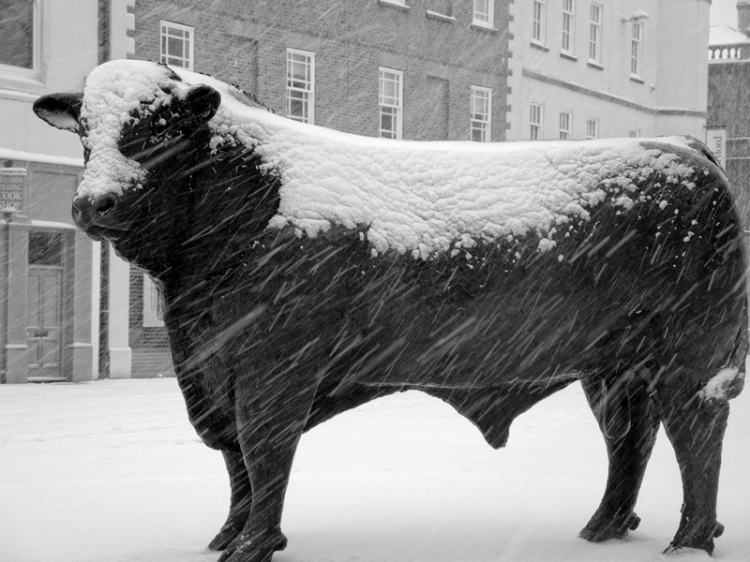 He is guarding the Old House. It strikes me that we Herefordians are not very imaginative when it comes to naming things!

Oh well, time to trudge back home for some hot chocolate.

14 thoughts on “Hereford in the Snow”