At the end of last summer we became aware that there was a female tawny owl  Strix aluco, in the vicinity. We often heard her distinctive “keewik” call in the early hours of the morning. It is more of a shriek whereas the male tawny owls make the more familiar hooting noise. 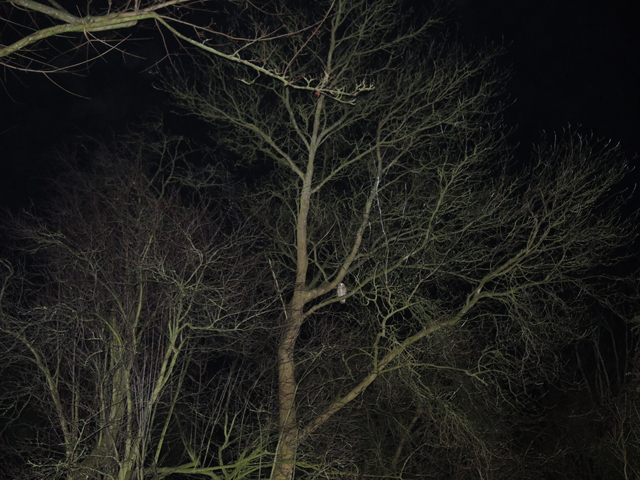 I thought it odd that a woodland owl should be hanging around suburbia, although we do have some mature trees in our garden the rest of the neighbourhood seem to enjoy taking chainsaws to theirs.  There is also a new housing estate being built behind us. We do live near to the Bulmers’ cider factory so perhaps that provided a plentiful supply of rodents. 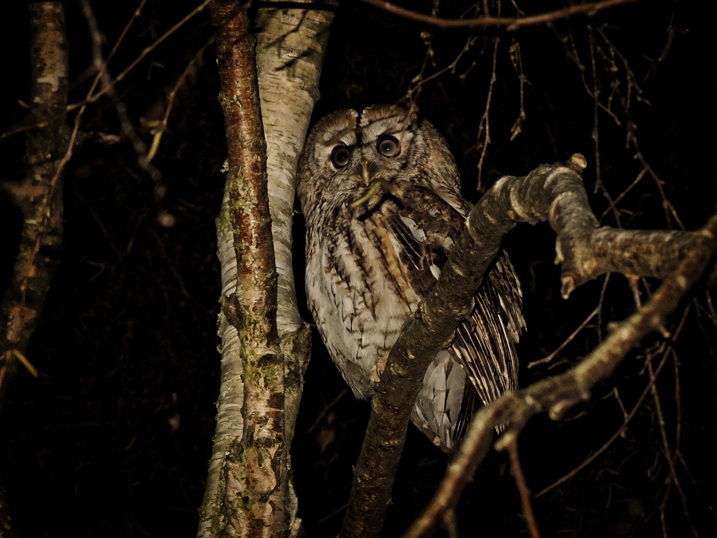 To my surprise one winter morning while taking flash photos of the bare tree branches (I was trying to get a spookily atmospheric photo) I noticed a large shape swoop into the tree, I looked up to see the tawny owl sitting on a branch staring back down at me. Without thinking I took a flash photo and then thought that would scare her away, but it didn’t. I suppose being a suburban owl she is used to lights. 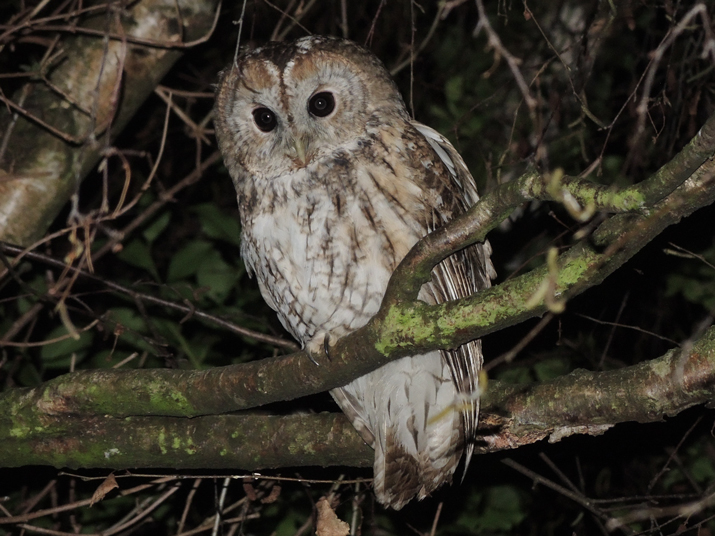 Since then I saw her most winter mornings, usually between 6.30 and 7am sitting in our birch trees. I would say a few words to her, take a couple of photos and then leave her to it. She usually peered down at me, swaying her head from side to side. Having ascertained that I was a harmless idiot she then went back to looking around, apparently listening to the bird song of the diurnal birds as they wake. 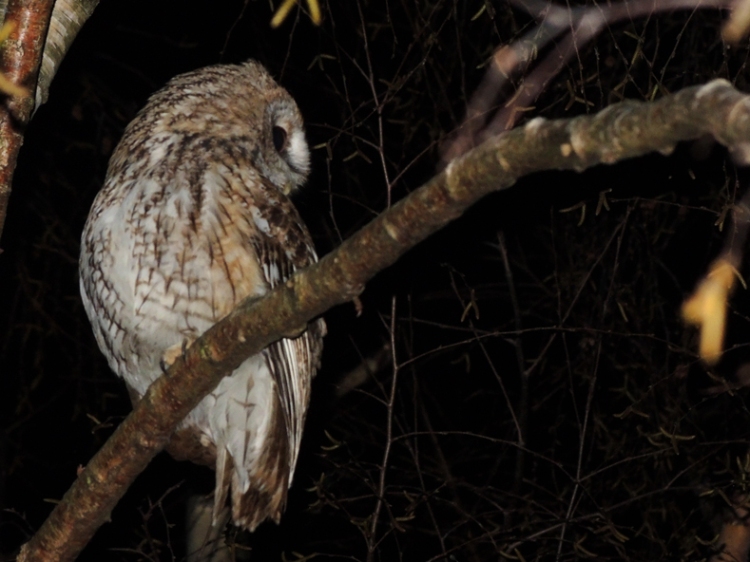 Then in spring there was the distant hooting of a male tawny and we have not seen or heard our female since. We assume that she was lured away by this feathery Lothario and hopefully is raising some fluffy owlets. Perhaps she will return to us afterwards. 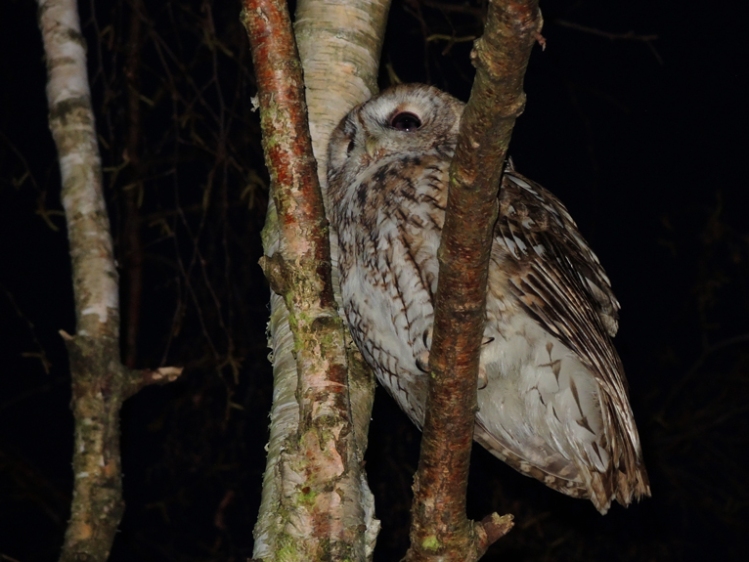 The tawny owl diet consists mainly of rodents such a voles, but also small birds, bats and even earthworms. Their digestive tract is kept healthy by consuming the bones which they then bring up again in owl pellets. 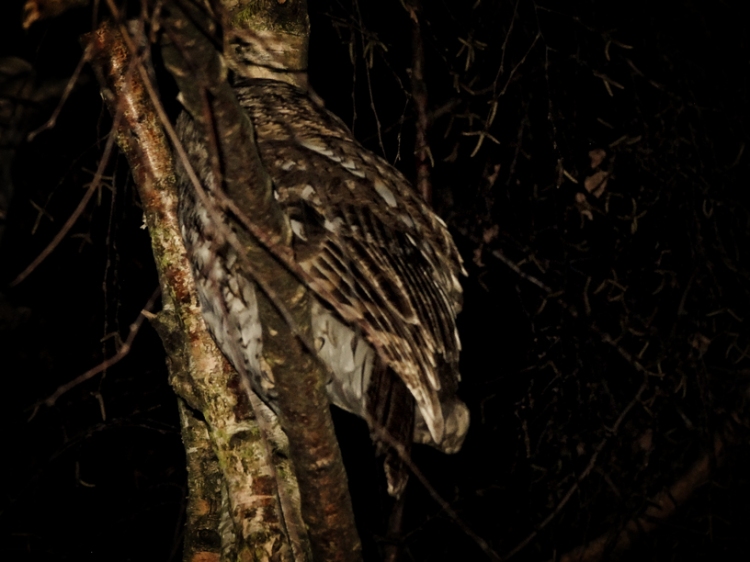 The “Tu-whit; Tu-who” call they are famous for is actually the duet between male and female owls calling.  Shakespeare is responsible for this misinformation from “Love’s Labour’s Lost”:

You can learn more and listen to their calls on the BTO website. The site even has a design to make a nest box for tawny owls. 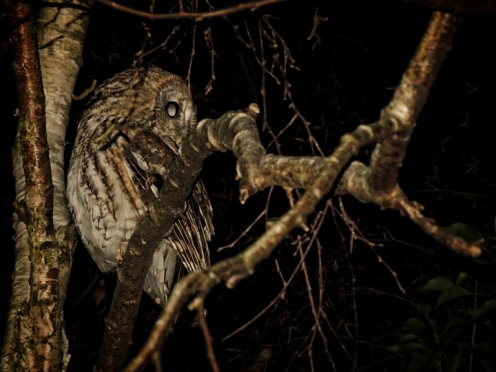 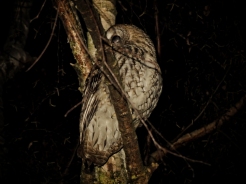 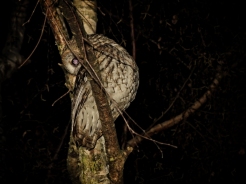